The European Football Championship of 2021 is afoot. Many people flock to watch the games – especially today, as the German team competes against Hungary, just hours after German chancellor Merkel publically decried a discriminatory Hungarian law. On days like these, it is hard to know whether politics or football take center-stage. But there’s yet another fascinating game that I happened to observe recently:

In a paper that got published a few days ago in the German law journal Archiv für die civilistische Praxis („Archive of Civil Law Studies“), I studied the world of German professors of private law and undertook „An Empirical Inquiry into their Demographics, Institutions, and their Areas of Research Interest„. I found that there are at present around 1,000 law professors in Germany, 465 of whom teach private law in one of 43 accredited law faculties (two of which are private institutions, all others public). Less than one-fifth (18.9 %) of private law professors are female, but four-fifths (79.7 %) have signed on to the highly exclusive Association of Private Law Professors that just turned Seventy after hosting 39 (roughly) biennial conferences. An invitation to speak at such a conference is a rare privilege that only 159 male and 17 female professors have enjoyed since 1951. (Some half-jokingly call these invited talks the „third state exam“ – with certainly the largest board of examiners in any academic’s career.) In stark contrast with other countries such as the US, only 1 in 20 German private law professors (5.2 %) have obtained degrees outside of law school.

Considering law professors as professional players, there is one game that a great many of them eagerly participate in: Obtaining degrees from abroad. While German legal education is rather traditional and „different from almost any other country in educating lawyers,“ many aspiring academics at some point in their career choose to get an international degree on top of their German qualifications. Unlike scholars from smaller countries like Israel, German legal academics don’t usually aspire to make their careers abroad. They use international degrees less as a foot in the door rather than a proudly displayed totem of membership in international academe. It is quite common in Germany to add academic degrees to one’s name, but it is also strictly regulated and most accepted for doctoral degrees as well as degrees from universities abroad. In this respect, international degrees are on par with doctorates, and worn prominently – like „war paint“, some say – to signal one’s international clout and familiarity with foreign legal systems.

Where do (future) German law professors obtain their degrees though? Which international university has most alumni among the private law professoriate? To the best of my knowledge, these questions have never been studied, so I conducted a comprehensive review and found that 123 private law professors (26.5 %) bear international degrees. Except for a handful degrees from France, most of these are either „LL.M.“ or „M.Jur.“,1 and they were awarded by the following institutions: 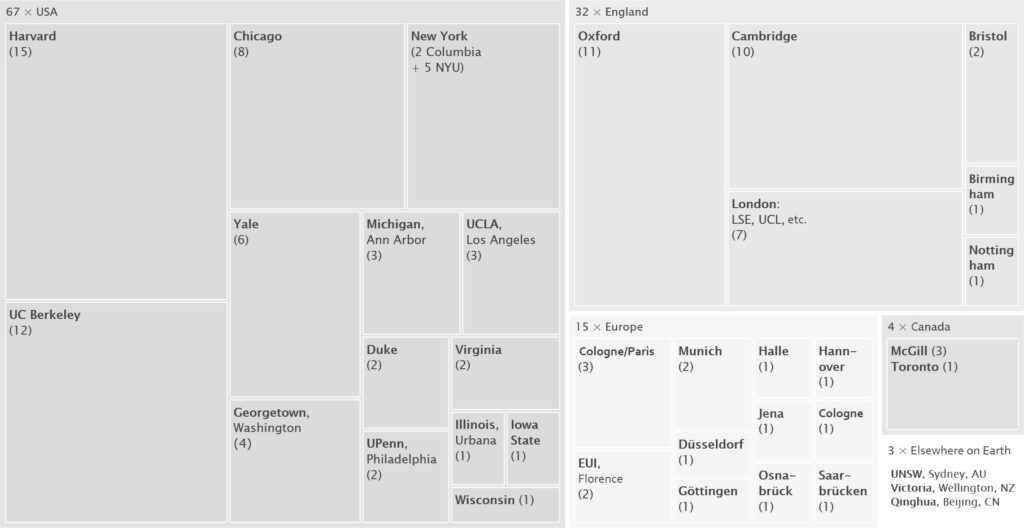 To sum up our little inquiry, here are the 2020 scores at the game just described:

Meanwhile, the actual match of the day (Germany – Hungary) concluded 2 – 2.