Common law jurisdictions pride themselves on having a keen sense of fiduciary relationships and the perils of self-dealing. While the UK’s influence on EU law may recede in the long run, it has left another lasting impression in the EU’s revised Shareholder Rights Directive that regulates corporate governance aspects of European listed companies. Besides encouraging stewardship by institutional investors and ensuring shareholders a „vote on pay“, the directive introduces a new set of provisions on the company’s dealings with related parties—parents, sibling entities, controlled and associated entities, and managers. The rules on related party transactions (RPTs) are evidently inspired by, and modelled on, Chapter 11 of the UK’s Listing Rules. They require an ex ante review of RPTs through public disclosure and approval by either the shareholder meeting or the board (see the summary of the directive).

The directive’s ex ante regime is novel to many continental jurisdictions, with Italy being a notable exception. German law, for instance, has adopted a very different approach at policing asset tunnelling by controllers. Dating back to 1965, the German Konzernrecht (law of the corporate group) relies on stringent liability rules against the parent as well as directors of the parent and the subsidiary. Yet enforcement has remained exceedingly rare, not least because shareholders cannot access the audited „dependency report“ on intra-group dealings. And despite the German stock market having opened up in recent decades, it still remains dominated by stronger insider interests than it’s counterparts in the UK or the US. Subjecting such insider transactions to more incisive scrutiny is a leap in the dark for Germany—and arguably for most other economies on the continent as well.

With a focus on the ongoing implementation of the Shareholder Rights Directive in Germany and elsewhere, we take advantage of the disclosure requirements under International Accounting Standard 24 (IAS 24) to cast some light on the magnitude of RPTs by German companies. In our recent paper, we provide hand-collected data on reported RPTs in 2017 for almost all German companies listed as of December 2017. We also offer descriptive evidence of the current ownership structures and listed companies’ group structures.

Ownership concentration remains high: 40% of German companies have a majority shareholder and 73% have at least one shareholder with 20% of the voting rights. In light of so many strong owners, one key question is the appropriate design of the materiality test triggering disclosure and the approval requirement. Our data allows us to estimate the fraction of companies that would be subject to ex ante review under various criteria. The present draft of the implementation bill sets the materiality threshold at 2.5% of balance sheet assets (for a critical assessment of the draft, see here). The following figure indicates that a mere 10–20% of German companies would have reached this limit—hardly a reason to worry about a flood tide of disclosures and board reviews. (In the figure, the horizontal axis represents potential trigger values relative to book assets; the straight line shows the maximum, the dashed line the minimum share of companies with at least one material RPT in 2017.) 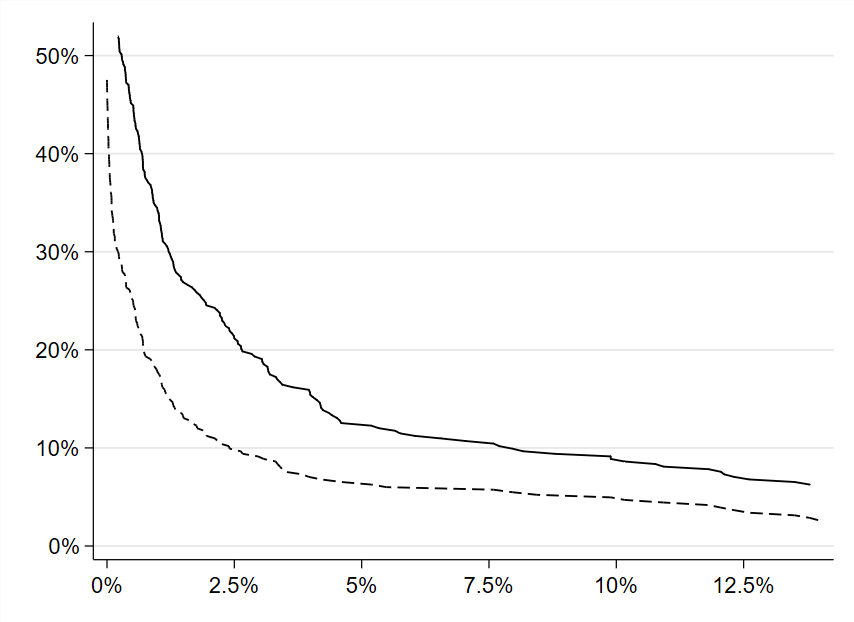 In addition to predicting its effect, we make a number of recommendations for the design of the materiality test. First, we suggest using more than one single reference value, such as company assets. One or two additional measures would make it harder for managers to sidestep RPT review by tinkering with the amount of a given transaction. More thresholds can also mitigate the burden arising from repeated reviews of the same type of recurring transaction. Our data shows that measures based on company sales and market capitalisation promise the greatest complementarity with an asset test.

Second, we expose what we believe to be a legislative oversight in the Shareholder Rights Directive—the inclusion of transactions with downstream entities (subsidiaries, joint ventures, and associates). By adopting the definition of „related parties“ from IAS 24, EU lawmakers appear to have overlooked that downstream transactions can serve to fudge the books but cause little tunnelling risk. In fact, downstream RPTs seem uncorrelated to ownership concentration in the listed companies as a proxy of tunnelling risk. Our data also demonstrates that downstream transactions are voluminous. In our view, member state legislation should therefore seek to neutralise the EU’s mistake by using optional exemptions and introducing a significantly higher threshold for downstream RPTs.

Third, judging from IAS 24 disclosures, we find that manager RPTs other than remuneration have little relevance in corporate Germany. We conclude that national legislation, at least in Germany and similar economies, should not bother to develop a special RPT regime for this small fry. Attention should remain focused on the critical task of screening RPTs with large and powerful shareholders and their affiliates.

This post first appeared in the Oxford Business Law Blog.